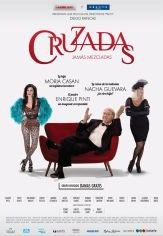 Juana Perez Roble and Camila Lamonica are sisters. They are daughters of same father, Ernesto Pérez Roble owner and founding partner of BA-News, a mega mediatic holding, but they are from different mother.
What will be the fate of two sisters with very opposite and hilarious destinies?