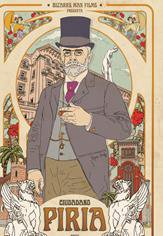 This is the story of Francisco Piria, the most unusual businessman in Uruguay.
Born in Montevideo to Genoese parents, he built his way from the bottom to possessing one of the largest fortunes at the time and to becoming the most popular celebrity. He was educated since he was a boy by a Jesuit monk