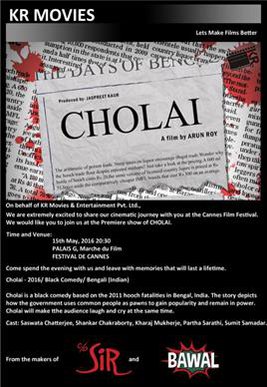 Cholai is a black comedy based on the 2011 hooch fatalities in Bengal, India. Country liquor, commonly known as ‘Cholai’ is a flourishing business in rural Bengal It is cheap and highly addictive.
A sudden turn of events is triggered when a batch of Cholai gets toxic during the brewing process. Soon people who had consumed the Cholai start falling ill and the death toll rises to 172. Media turns the incident into a political drama.
To pacify the outrage, the Government launches compensation for the family members of the victims. A gold-rush ensues following the announcement, everyone wants their share. Deaths due to other causes could be become ‘entitled’ for compensation if the right palms are greased with their share. The mourning soon transforms into greed and corruption.