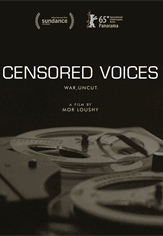 A week after the 1967 ‘Six-Day’ war, a group of young kibbutzinks, led by Amos Oz
and Editor Avraham Shapira, recorded intimate conversations with soldiers returning from the
battlefield. The Israeli army censored the recordings, allowing only a fragment of the conversations to
be published.