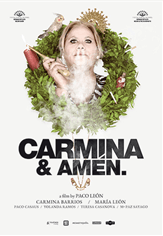 Typically Spanish and wonderfully universal, Carmina & Amen joyously breaks taboos and brings back echoes of much-beloved films such as Volver.

In this outrageously funny and original comedy by comedian Paco León (Carmina or Blow Up), he proofs himself a worthy successor of Almodóvar.