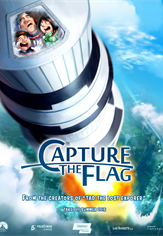 Richard Carson, an ambitious multimillionaire, wants to take over the terrestrial satellite and exploit the source of clean energy of the future, the Helio 3. In order to achieve this, he must erase from history all traces of the Apolo XI astronauts and their first steps on the moon, which 40% of the world population believes to be untrue. The only one who can stop Carson from getting away with this is a friendly and determined 12-year-old surfer, Mike Goldwing. With the help of his friends, the nerdy Marty, the future journalist Amy, and a small lizard with aspirations to become Godzilla, they travel to the moon in the company of Mike’s grandpa, a retired astronaut who’s been estranged from his family for years. Now it’s in Mike’s hands not only to save the future of the Earth, but of his own family.