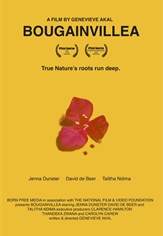 Lola once had an original writing voice, but now she's a blogger consumed by constructing the image of a quirky and desirable lifestyle. She meticulously prepares for a chic dinner party where she will do a chapter reading and hopefully secure a vapid 'Chick Lit' book deal. Everything is going according to plan until a Bougainvillea begins to intrude, threatening her life of pretense and the book deal.