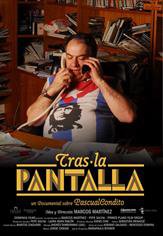 “I feel tired of all this daily battle that is bad for my health”, film distributor Pascual Condito wrote when, two years ago, he announced his retirement from the market. Marcos Martínez captures his reinvention and exposes him as a furious Quixote fighting against Hollywood and the big companies.