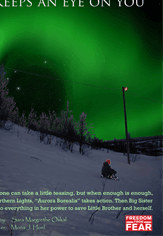 AURORA KEEPS AN EYE ON YOU

A hard working, single mother offends her eldest daughter badly. The daughter revenges on her small brother, forcing him out sledging in the freezing night, past bedtime. He tries to escape but she ties him to the sledge and sends him off into the dark. Suddenly he´s gone and is nowhere to be found.

Tromsø 2015
Login to view all information