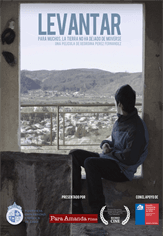 Luis's earthquake is not the one that left him homeless in 2010; his own tremor starts with the imminent departure of his sister Ale, who has decided to escape from a city that rises leaving them behind.