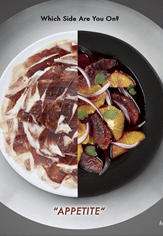 The Englishman who popularized “extreme meats” in Europe (through his cookbooks) does battle with his daughter, a University student and radical vegan activist whose mission in life is to destroy her father’s culinary influence in favor of a “plant-based diet and vegan world order.”