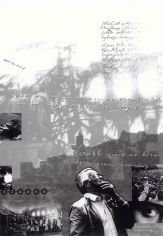 Nutsa, aka Barabashka (Poltergeist), - the young charming woman – night broadcaster at the “Human Voice” radio station, despite the violence, that prevail in the life outside the studio after the Civil War manages to brave her audience with her monologues about the unfinished film of her Master