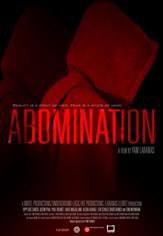 ABOMINATION follows a young woman who is found unconscious in a city street and claims to be another person who was brutally murdered two months earlier. She escapes from a psychiatric hospital in order to prove her identity and find the truth about her life, her death, and her murderer.