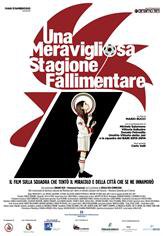 A WONDERFUL SEASON OF FAILURE

The film tells the amazing story – from the locker rooms - lived by Bari football team in the second leg of the Italian 2013-2014 championship. A southern- Italy town corrupted by the match-fixing scandal in 2011. A team without any pretension.A sports club that after 37 years of history fails in mid-season.An entire city which takes action to pay for gasoline and buses on away games.Players who buy themselves the jerseys to play.The social campaign #compratelabari that goes viral and involves actors, musicians, journalists and even pornstars like the famous Italian actor Rocco Siffredi.The incredible comeback from the seventeenth to the seventh place of the league, and finally the playoffs. The club is put on auction. The contagious enthusiasm of a city which starts to believe in football again.The playoffs, with the team that is ruled out in the semifinals though never losing a game.Astory that has to do with football, with sports, with a city, a community, but also with each of us, with those who play their game without taking off their legs and guts.Desire and emotion, failure and joy. It happened in Bari, but it could have happened anywhere.