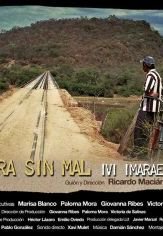 A LAND WITHOUT EVIL IVI IMARAE

Doctor Pilar Mateo, inventor of a painting capable of eradicating the VINCHUCA; a bug that transmits Chagas disease, has been working with her team of vinchuqueros in the Bolivian Chaco for over twelve years. A film crew now moves to Bolivia to investigate the so called "Chagas disease".
Why after