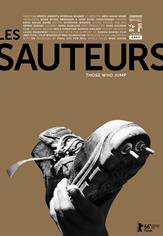 For over a year, Abou and thousands of migrants have attempted to jump the fence between Morocco and Spain.
Behind the camera himself, Abou portrays their struggle for freedom and dignity.