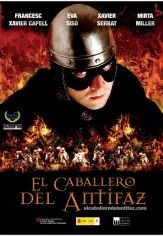 Based on Manuel Gago’s comic character, “The masked knight”. After
a mysterious masked knight has left the county, an Arab raid invades
part of the territory capturing the inhabitants as slaves. The daughter of
the count, who was in an undefended monastery, was among them. As
the masked knight w