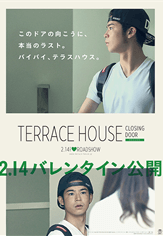 PONY CANYON INC - as SALES All rights, Other

Terrace House was a TV reality show that captured the lives of six men and women who lived together in a share house overlooking the sea.
And in September 2014, the show came to an end despite its continued popularity.
Terrace House had continued ever since that day.