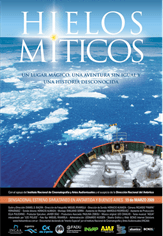 For thousands of years, the most famous adventurers and men of science have tired to discover the mystery and the secrets Antartica still keeps.
In the same way, the argentine nation has also been interested in exploring Antartica’s territory. Thus, it produced a generation of Argentine’s antartic explorers like Hernan Pujato who was the most important Argentine antartic explorer in the 50’s.
“Mythical Ices” describes the most important expeditions that Pujato made.
The film, shows an amazing travel, the last trip of the Argentine’s icebreaker ship “Almirante Irizar” ,and the beauty of the continent that has the most important water natural reservation of the world.