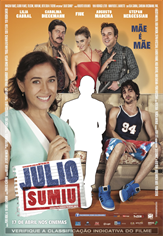 Both sides of the tracks clash together in this Brazilian dark comedy. When a mother fears that her son might've been kidnapped, she joins forces with a local drug lord (City of God's Leandro Firmino) to sell drugs in her house during a police occupation.