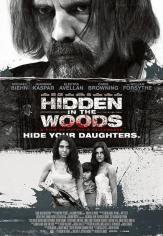 HIDDEN IN THE WOODS

HIDDEN IN THE WOODS (REMAKE)

Hidden in The Woods, Starring Michael Biehn (Terminator). it tells the story of two sisters who have been raised in isolation, subjected to the torment of their abusive, drug dealing father. When they finally decide to report him to the police, he kills the two officers and is put in jail.