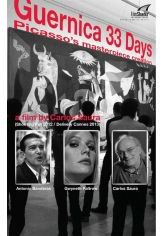 FILMSHARKS / THE REMAKE CO. - as SALES All rights, World

t is 1937 and Spain is in the grips of Civil War. Pablo Picasso, who at the time is Honorary Director of the Prado Museum of Madrid, receives a commission from the Spanish Republican Government to create a mural for the Spanish Pavilion at the World Fair being held in Paris.