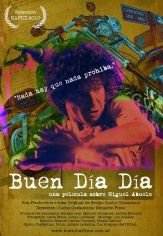 Miguel Abuelo's size as a rock artist has often been neglected in favor of more mundane aspects of his complex personality. His own son, Gato Azul,riding his motorcycle acts as guide through a Buenos Aires night in which appear, here and there, the deep scars of the live of the singer in this world.