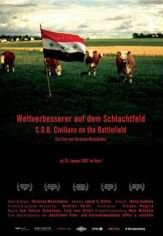 CIVILIANS ON THE BATTLEFIELD

"C.O.B" tells the story of four Germans – two men and two women – who are all around 30 and work as "war extras" for the U.S. Army at a combat training center in the Bavarian forest. For a few weeks, they play-act at being Arabian terrorists and simulate worst-case scenarios, on German territory.