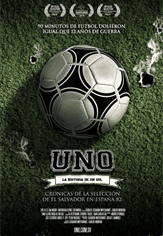 ONE, THE STORY OF A GOAL

During El Salvador´s early 80s civil war, their National Soccer Team achieved an unforgettable classification to 82’s Spain World Cup just to be defeated by Hungary 10-1 in their first match, the worst result ever, but also the only time El Salvador has scored a goal in a World Cup.