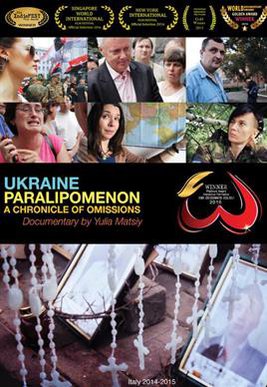 UKRAINE. PARALIPOMENON. A CHRONICLE OF OMISSIONS

The film features scenes and stories that are usually not included in films on Ukraine.

Author’s reportage “Ukraine, Paralipomenon. A Chronicle of Omissions.” hightlightes the reality of Ukraine and Hong Kong during the summer 2014.

In post-Maidan Kiev survivor’s guilt following the revolution. A strong patriotic spirit associate very different groups, including extreme right-wing paramilitary groups and drag queens at gay nightclubs. People in the Ukrainian capital petition the government to block an ‘undeclared war’ against the East.

The city of Slavyansk is seen moments after it was liberated from Russian occupation. There are mass graves and some have land mines. The film also reveals the improper use of humanitarian aid and separatists hiding out in the city.

Hong Kong is protesting against democracy restriction and the police is attacking protestants.

“Paralipomenon” is Greek for “[book] of omissions”. Indeed, the documentary presents material that shows fresh details and new events never included before in the films about Ucraine case, so it provides a more in-depth view.

Working on this film was particularly challenging. It offers a critical view of the political stance taken by filmmaker’s home country of Russia.