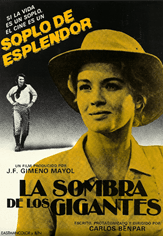 An experimental film shot between 1968 and 1973 and shown at the Locarno Film Festival in 1974. It tells of a man’s adventures as he tries to prevent the destruction of the cinema, and there are appearances by the censors. It did not enjoy legal status until 1981, when it was retitled “La sombra de los gigantes” (The Shadow of the Giants).