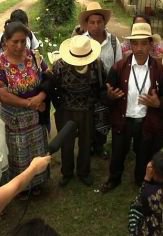 THE ECHO OF PAIN OF THE MANY

In ‘The Echo of Pain’ we witness a rare documentary by a Latin American woman, recording her return from exile and into the volatile contemporary Guatemala,where over the course of four years, Ana Lucia discovers the involvement of her own government in the murder of her brother and his young family