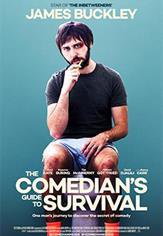 THE COMEDIAN'S GUIDE TO SURVIVAL

Failed stand up comedian James Mullinger comes to a cross roads in his life. No one wants to see him perform, his wife is fed up, and his day time boss has given him an ultimatum; take a promotion and never do stand up again, or stick to the comedy and lose his job.