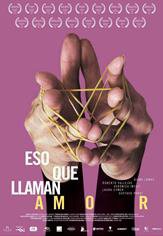 That Called Love is a dramatic feature film with touches of comedy that deals with couple relationships. It will be finally proved that it is not always love the livelihood of a couple, even though many relationships are built in the name of it.