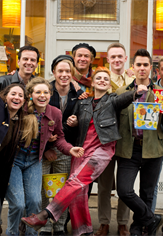 Summer of 1984 – Margaret Thatcher is in power. A group of gay and lesbian activists decides to raise money to support the families of the striking miners. And so begins the extraordinary story of two seemingly alien communities who form a surprising and ultimately triumphant partnership.