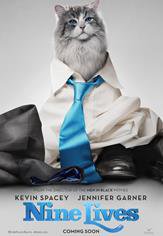 Kevin Spacey and Jennifer Garner star in the family comedy NINE LIVES. Spacey plays a workaholic billionaire whose lifestyle has disconnected him from his wife and family when a freak mishap leaves him trapped inside the body of a cat. Adopted by his own family, he begins to see them and his life through a new—unexpectedly furry—perspective. Directed by Barry Sonnenfeld (MEN IN BLACK, THE ADDAMS FAMILY).