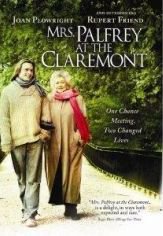 MRS PALFREY AT THE CLAREMONT

When an elderly Scottish widow, Mrs. Palfrey (Oscar-nominated actress Joan Plowright) moves to London she finds the big city less welcoming than she expected. But when a young man (Rupert Friend) helps her after a fall she discovers that the metropolis may not be as lonely as it first appeared.