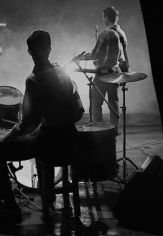 Chile, 1979. San Miguel is a poor district, where Miguel (15) begins his high school with the secret wish to build a rock band. In an environment of unemployment and increasing violence, with 2 classmates he starts LOS VINCHUKAS. This group will later become LOS PRISIONEROS, Chile's most famous band