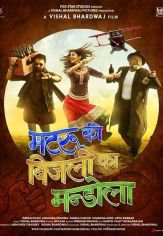 Set in the rustic surroundings of a village in Haryana in India, Matru ki Bijlee ka Mandola is a comedy-drama about Harry Mandola a wealthy industrialist who loves his drink, his daughter Bijlee and the unusual bond they both share with Harry’s man friday, Matru.