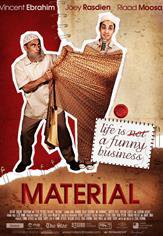 CASSIM is a young Muslim man working in his father’s (EBRAHIM) textile store. It’s Ebrahim’s dream for Cassim to take over the shop, but Cassim has discovered a talent for stand-up comedy, and he soon finds himself in direct conflict with his father, his family and his community.