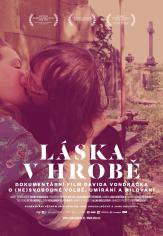 LOVE IN THE GRAVE

„DOCUMENTARY ABOUT (UN) FREEDOM CHOICE,
DYING AND LOVING“
In the beginning of 21st century group of homeless people found asylum in the german evangelistic graveyard in Prague – Strašnice. Among them there is a couple of eternal fiances: Jana in Christs age and Jan, 50 years old.