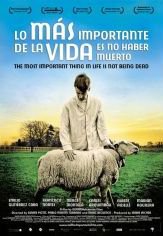 Is the life we think safe and secure true, or is there a second reality lurking? The Most Important Thing In Life Is Not Being Dead is a playful tragicomedy of betrayal and forgiveness, set against the Franco era, a period of political deceit and distorted reality in Spain.