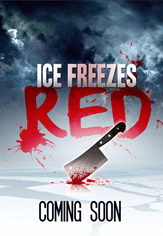 MAKE IT HAPPEN ENTERTAINMENT - as PROD

Set in the rugged streets of Little Saigon ICE FREEZES RED is the story of MIKA LEE, a beautiful, disaffected 23 year old girl who, as a teenager, suffered a deep catatonic coma. When she regains consciousness five years later she finds herself in a cruel world she doesn't recognize.