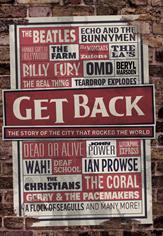 THE CITY THAT ROCKED THE WORLD

Liverpool music from the post war years to the present day. Liverpool is one of the most vibrant cities in the world. The film puts into context the musical outpourings of nearly 60 years of world conquering music and the hundreds of bands who have contributed to a musical scene that produced the world's greatest band - The Beatles.