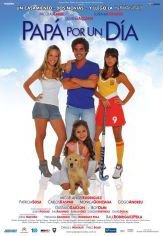 DAD FOR A DAY

A young man who is about to get married receives an unexpected piece of news that forces him to take care and responsibility becoming a father of a sister he has never met, and a beautiful woman.
He has to chose between two women in a final hockey match were the real dispute is love.