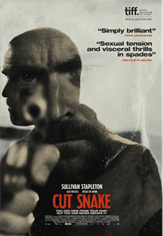 Sparra Farrell gets out of prison hoping to put his past behind him. But he finds it’s a door that’s never closed.
Cut Snake is a tense, psychologically driven crime thriller in which one man discovers his biggest enemy to putting the past behind him is himself.