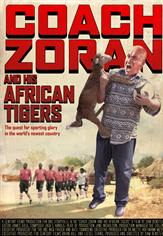 COACH ZORAN AND HIS AFRICAN TIGERS

CAT&DOCS - as SALES All rights, World

South Sudan became an independent state in July 2011, after almost 50 years of civil war. This film follows veteran Serbian coach Zoran Djordjevic as he sets about building the first national football team in this new country, one of the most undeveloped in the world.