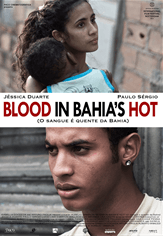 Two kids, just barely sixteen years old, Joao and Vandinha. They have a baby boy and she’s already expecting a second child. Joao is not a delinquent, but a kid who is constantly looking for any form of gainful employment. Every now and then, he sells his body or robs a tourist in the city’s gay circuit. Like many others, he does his best to stay afloat, but without resorting to murder or behaving like a desperado. One day Joao won’t come back from the work at the construction site. He disappears. Vandinha seeks after him in the favelas of Bahia.