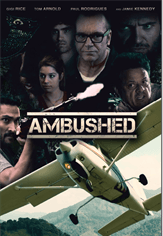 Mother and son, Diane and Michael Ireland have just completed another successful medical mission trip to Mexico. Their plane waits on a nearby grass strip to take them home to Mission Air, their home in Texas. As they arrive at the plane a group of bandits attack in an effort to steal the plane.After a struggle with the bandits Michael and Diane narrowly escape with their lives and their plane. Back in Mexico the bandits are bent on revenge against the Irelands for the loss of one of their own during the struggle for the plane. The bandits formulate a plan to kidnap the Ireland's daughter, Sophie, to bait the Irelands to return to Mexico to exact their revenge. Having no other recourse, Diane and crew risk everything to save Sophie.